What is emotion regulation and how do we do it?

Why is emotion regulation important?

Emotions are intertwined with almost all our thoughts and actions, but most of us were never taught how emotions work. And we tend to underestimate our ability to control them.

Medications may be helpful for some people, but most who struggle with emotion regulation are likely to benefit from psychotherapy or coaching that specifically focuses on learning how emotions work and practicing techniques will improve the brain’s ability to regulate them.

By changing how the brain processes emotion-relevant information ,psychologically-sound emotion regulation therapies can usually get closer to solving the root cause. Emotion regulation psychotherapies aren’t used as often as they should be. So, in this article, I will explain what emotions are, why we have them, and how we can learn to regulate them.

To put it simply, emotions are the name or label we assign to a particular feeling in the body that is caused in response to a situation, event, thought, or memory. Emotions the feeling of the body’s physiology responding to situations (or to thoughts). Emotions involve changes in blood pressure, heart rate, sweat production, alertness level, energy level, and more. Emotions are formed through the process below, adapted from Sheppes et al., 2015:

A situation arises — let’s say there’s suddenly strange noises at your front door and your heartbeat quickens. Your attention switches from the dish you were washing to focus on the noise and you become aware of the sensation of your heart pounding in your chest. It is late in the evening and you were not expecting guests, and so you assess that the noises could be an intruder. As a result, you emote fear.

In contrast, let’s reimagine the same situation, but you were expecting a neighbor to swing by in the evening. In this situation, you assess that your increased heartrate is a positive response, and instead, you emote curiosity about the source of the noises. 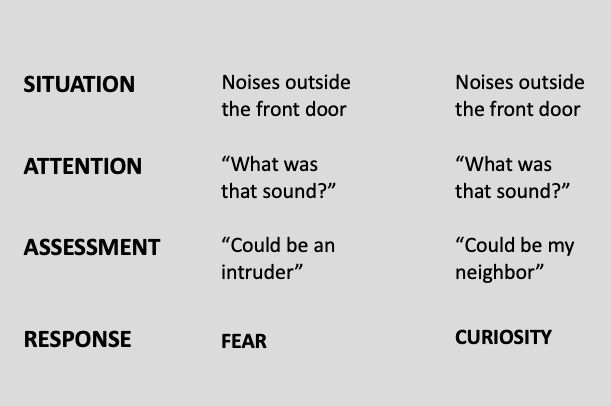 Why do we have emotions?

We human beings are hardwired for social interaction. We’re genetically programmed to be part of communities. Outward expressions of emotion, such as facial expressions, body language, and vocal tone can quickly provide critical information to those nearby. Even perceived negative emotions, like shame, are important to maintaining social norms and order in a society, as people will avoid behaviors that cause them to feel negatively. While emotions can sometimes feel like an inconvenience, they serve important functions to our survival and socialization.

What emotions are NOT

The language that we use in describing emotions is extremely important, and even small metaphors can have massive impacts on the way that we perceive people and how people perceive themselves.

For instance, the term “trigger” has grown into popularity as a way to express how people can feel like they don’t have control over their emotions in response to a certain situation or environmental cue. While the term is well-intentioned, it compares human emotions to weapons, implying the dangerous notion that emotions are ballistic, uncontrollable forces that must proceed to completion (Sheppes et al., 2015).

However, as I’ll explain later in this post, we all have the ability to regulate our emotions. It is a skill that can be taught and practiced. Passively likening people to firearms is hugely disempowering. Instead, it is important to teach people that once they feel angry, for example, they don’t have to take that anger to any type of endpoint. Instead, they have control over their response.

How does emotion regulation work?

The areas of the brain involved in the emotion regulation process can be grouped into three general categories: the “thinking brain,” the “emoting brain,” and the “doing brain” (Taylor and Liberzon, 2007). 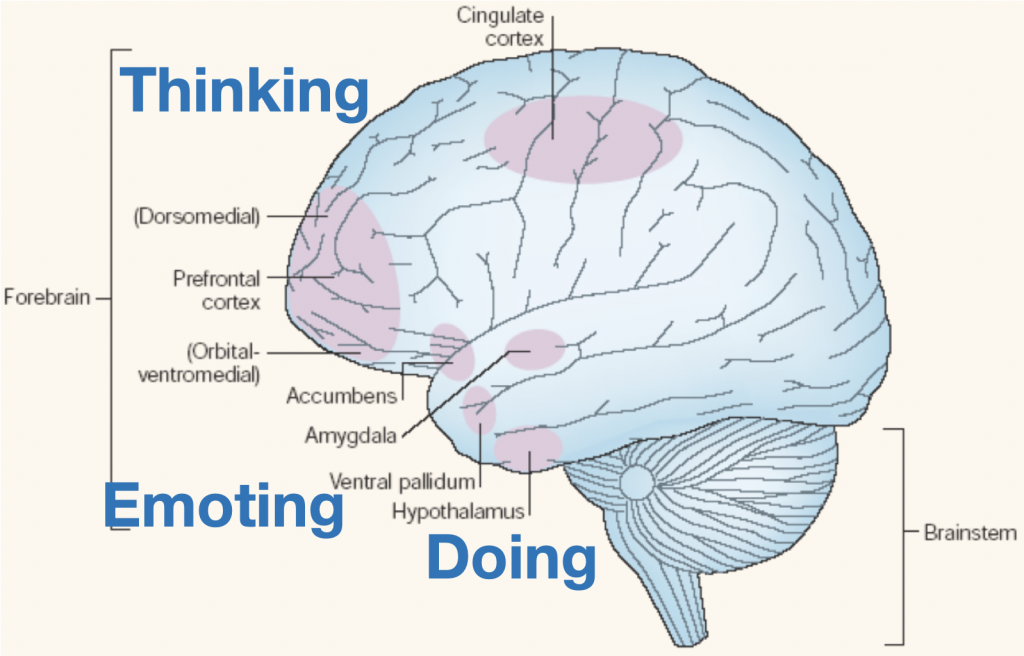 The key here is that emotion regulation is a dynamic process and that the thinking and emoting parts of the brain are closely connected. This means that, with practice, we can intervene at many points throughout the process and regulate our emotions.

What is emotion regulation therapy?

Effects of emotion regulation therapy on the brain

Just like learning a new language and practicing grammar, practicing emotion regulation can reshape the structure and function of the brain. By practicing the techniques above over time, patients can increase the number and strength of neuronal connections between the thinking and emoting brain regions, increase the volume and density of grey matter in the brain (which is involved with processing emotions), and decrease overactivity or hyperreactivity in the amygdala, a brain structure that receives signals from the body and processes emotional responses. It can be incredibly empowering for patients to learn that many aspects of emotion are modifiable with practice and that their current struggles with emotion dysregulation are not forever. No matter how skilled one currently is at emotion regulation, anyone can practice emotion regulation and get better.

You can find a lecture with more information on emotion regulation on my YouTube channel, 15-Minute Pharmacology. The lecture was given at the May 12, 2020 meeting of the SZconsult learning community.

This article summarizes the results and conclusions of articles published in the medical literature. It is for general information. It is not a substitute for medical advice, and readers are admonished not to enact or change treatments based on this article. Always seek the advice of your doctor before starting or changing treatment.

The thoughts, views, and opinions expressed in this article are my own and do not reflect or represent the policy or position of Northeast Ohio Medical University.