The full report is available as an open-access article.

In order to compare the results of different studies, Firth and colleagues examined each individual clinical study of exercise effects on cognition and converted each study’s results into a statistic called ‘effect size.’

Here is what they found:

Let’s put these effect size numbers into perspective. Below is a graph that shows the effect size estimates for most of the modern antipsychotic medications. 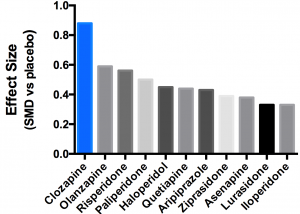 Data are from Andrade, C. (2016). Antipsychotic Drugs in Schizophrenia: Relative Effects in Patients With and Without Treatment Resistance. J Clin Psychiatry 77, e1656–e1660.

An effect size of 0.7 is larger than the effect size of most of the antipsychotic drugs to reduce psychosis. This is a big deal because deficits in social cognition (the ability to interpret emotion or to correctly guess someone’s intentions based on facial expressions or body language) can be an especially disabling feature of schizophrenia for some individuals. Deficits in social cognition contribute to social withdrawal and disability.

A missing ingredient in schizophrenia treatment

If a drug were discovered that could improve attention or social cognition with an effect size of 0.6 to 0.7, that drug would be viewed as a breakthrough treatment and it would rise to the top of the list of recommendations for schizophrenia care. Every mental health clinic would be expected to make it available to their patients.

As human beings, we tend to overestimate the importance of rare things (like new drugs) and we tend to massively under-appreciate the potential for common things (like supportive family, aspirin, or exercise) to solve big problems. This report by Firth et al. should make us re-think or re-prioritize the role of exercise as part of schizophrenia care. It deserves to be taken seriously.