Does marijuana cause schizophrenia?

The risk of schizophrenia jumps by more than 300% among regular cannabis users. This is a well-established fact.

What has been unclear is whether this additional risk is actually caused by the cannabis exposure, or whether the association is secondary to some other process (for example, maybe people destined to develop schizophrenia happen to find cannabis more useful than the average person and therefore use it more often).

The hypothesis is based on findings that:

This would make the frequent marijuana user more vulnerable to the effects of brain inflammation and thus more prone to develop a schizophrenia-like psychosis.

Regular cannabis use is a schizophrenia risk factor

Frequent users of cannabis are diagnosed with schizophrenia much more often than non-users. Schizophrenia begins at earlier ages in cannabis users, and higher exposure to cannabis in early life corresponds to greater risk of schizophrenia later in life. Genetic analyses using a specialized approach called Mendelian Randomization suggest that the association is causative, not coincidental.

Anandamide, the brain’s own cannabinoid, may protect against inflammation and psychosis

Anandamide defense system, low in schizophrenia, is further lowered by regular cannabis use

A possible explanation for the cannabis-schizophrenia connection

It appears that prolonged exposure to exogenous plant-derived cannabinoids reduces the body’s ability to form its major endogenous cannabinoid, anandamide. Diminished anandamide response renders the brain more susceptible to inflammatory insults. This hypothesis could also account for findings of cannabis-associated schizophrenia-like psychosis being less likely to respond to first-line antipsychotic medication. Under this hypothesis, cannabis-associated psychosis may have more to do with exaggerated inflammation than with exaggerated dopamine signals. These observations are based on a relatively small number of studies, but existing data suggest a mechanism to explain widely-replicated observations of higher schizophrenia risk in regular cannabis users. 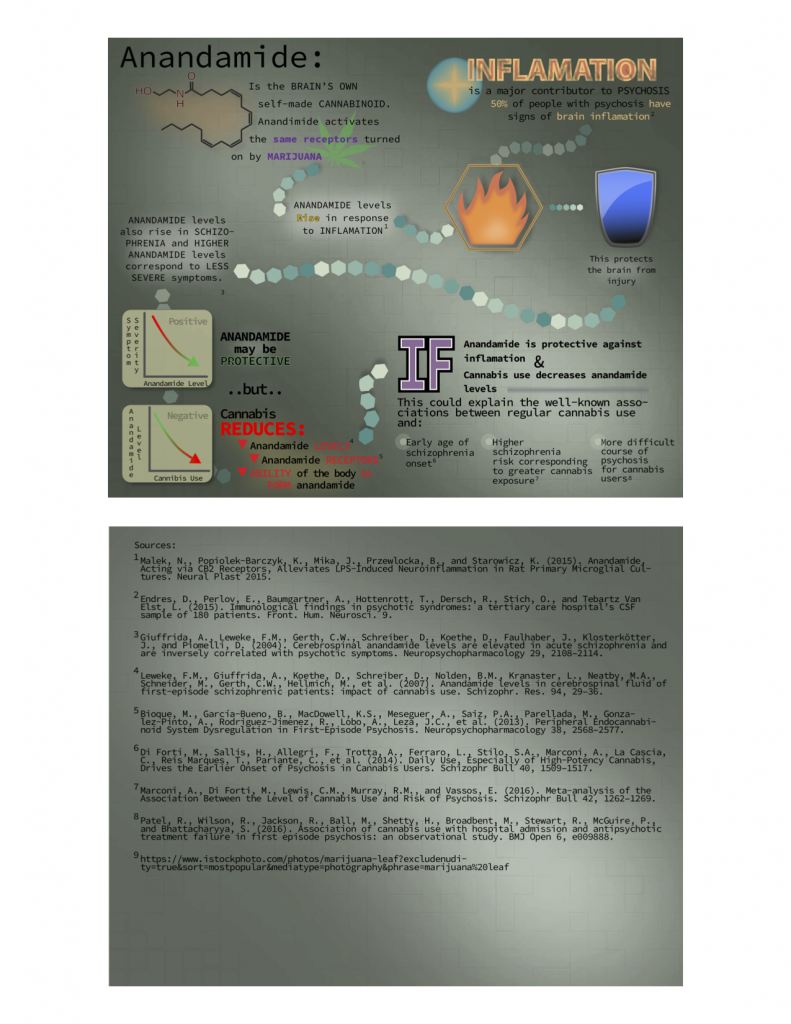 Anandamide, the brain’s major endogenous cannabinoid, reduces inflammation. Regular marijuana users have lower levels of anandamide and lower ability to create it. Inflammation is an important cause of psychosis. Cannabis users are known to be at higher risk for schizophrenia, and reduced anandamide signaling may be the explanation.